The first work Gibson conceived for Like a Hammer was the film “Video: one becomes the other” (2014–2018). The film is set in the Native American archives and art storage of the Denver Art Museum. We see a man speaking Kiowa pick up a hand drum from a shelf and begin to play. A woman in a long, white dress with colorful patterns enters the halls, dancing in time. There is an improvised moment where an art handler asks to participate in the filming. He opens a drawer, and finds a Navajo weaving comb like his grandmother’s. He talks to the comb as if it is his deceased grandmother, bringing himself to tears. The sleeping objects are understood as living.

When asked about the indigenous artifacts and intertribal references he makes in the film, Gibson responded, “Isn’t that what we do in contemporary art? We take from lots of spaces.” It is a poetic postmodern reminder that art resonates beyond the context of its makers. Does it make sense to distinguish Native American art today from other contemporary art? Does the category perpetuate generalizations and patterns of thinking? By blurring Native and non-Native elements, Gibson keeps these questions alive and insures that the art remains central to our answers. - Kealey Boyd for Hyperallergic 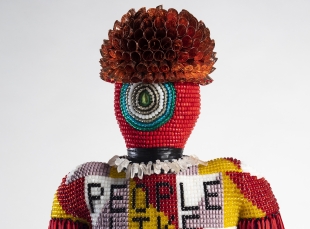