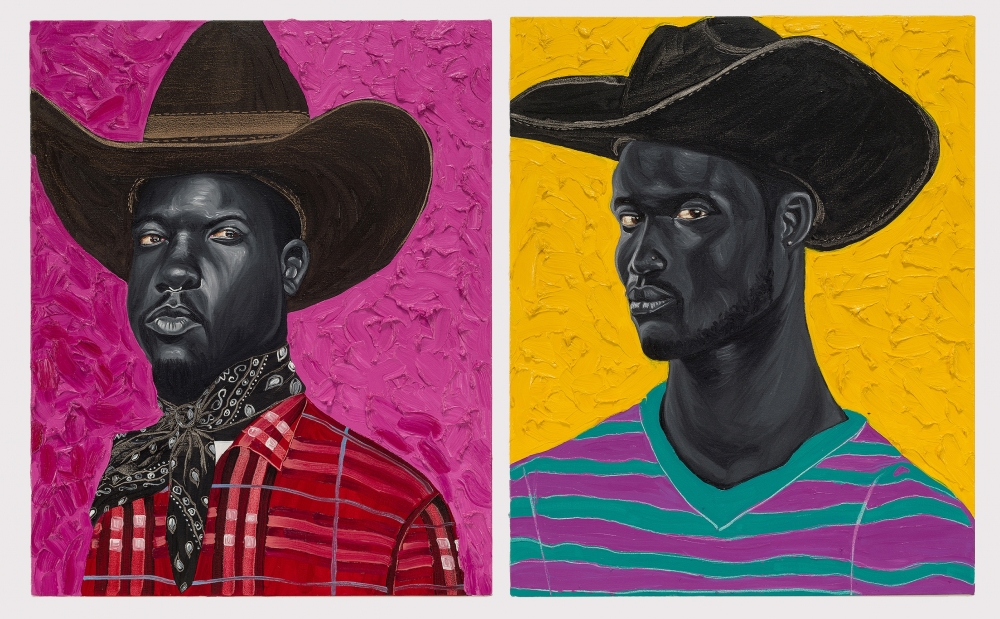 Otis Kwame Kye Quaicoe: Black Cowboy takes as its subject the lesser-known history of Black cowboys of the American Frontier as seen through lens of contemporary portraiture. Quaicoe, a Ghanian painter living in Portland, Oregon, utilizes color to accentuate his subjects’ themes of empowerment while embracing ideas of personal narrative. His portraits of Black cowboys modernize the genre without continuing a popular yet inaccurate and exclusionary account of US history. In Black Cowboy, Quaicoe approaches painting as an exploratory medium for self-reflexive commentary while engaging with the history of the medium itself. Rendered in an approachable scale, the resulting portraits are intimate, and invite comparison to Baroque devotional paintings. A common theme throughout Quaicoe’s practice is the use of color and how it further accentuates his subjects, be it political or personal. His richly textured paintings convey the complexities of the diasporic experiences of both himself and the people whose portraits are captured within.

A recent transplant to the US, Quaicoe was inspired by the cultural legacy of the American cowboy while at the same time remained conflicted by its lack of accurate representation and negative stereotypes. Since 2017, his interest in painting friends and peers posed as herdsmen was sparked by engaging with this history while simultaneously addressing the disparity. It is important to note that Quaicoe is not recontextualizing history but is simply revealing one that has always been there.

One in four American cowboys was Black1, yet the enduring narrative of the cowboy figure is that of the heroic white male. He stood for the American ideals of both individual freedom and national self-determination and was crafted in the mold of the early white explorer figure. This image was a romantic creation of man, both in direct confrontation to nature and civilization, yet was one that whitewashed the evolution of horseriders and herdsmen of the American Plains. By 1825, Black slaves accounted for 25% of the Texas population. By 1860, that number had risen to over 30%2. Shortly after Texas joined the Confederacy in 1861, many white Texans traveled east to fight in the Civil War. In their absence, they depended on slaves to maintain their lands. Following the war’s end, and the Emancipation Proclamation declaration and Juneteenth, newly free and now highly skilled Black Americans became employed–in Texas and beyond–as paid cowhands. The unrestricted life of the Plains afforded Black cowboys a rare level of equality with their white counterparts.

Recent work by scholars and writers, exhibits organized on the subject including Black Cowboy at the Studio Museum Harlem (2017), and the renewed visibility of contemporary groups including the Compton Cowboys and Houston Cowboys during the 2020 Black Lives Matters protests has subverted this early image of the American cowboy into one that is dynamically intersectional. Quaicoe’s contemporary portraits continue this radical interpretation through work that challenges existing norms, introduces new ideas of racial, cultural and national identification, and highlights the true legacy of Black Americans of the American West.

Footnotes: 1. In 1965, two UCLA English professors, Philip Durham and Everett L. Jones, published a book called THE NEGRO COWBOYS. They estimated that there were at least 5,000 black cowhands in the late 19th-century American West. Four years later, University of Oregon history professor Kenneth Wiggins Porter argued that the number was closer to 8,000-9,000 -- about 25 per cent -- of the 35,000 or so cowboys who worked in the frontier cattle industry. 2. Nodjimbadem, Katie “The Lesser-Known History of African-American Cowboys” smithsonianmag.com. February 13, 2017. 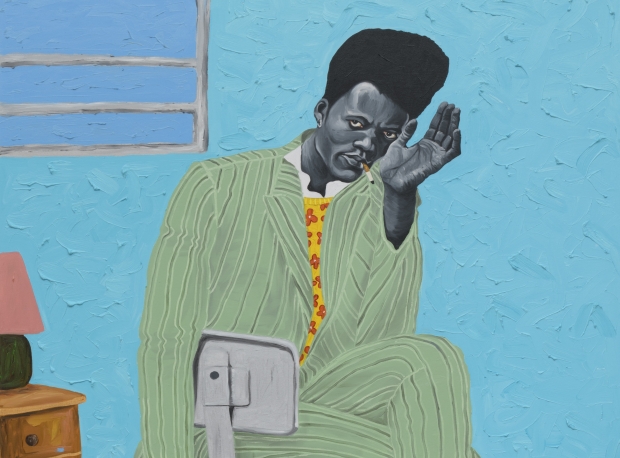