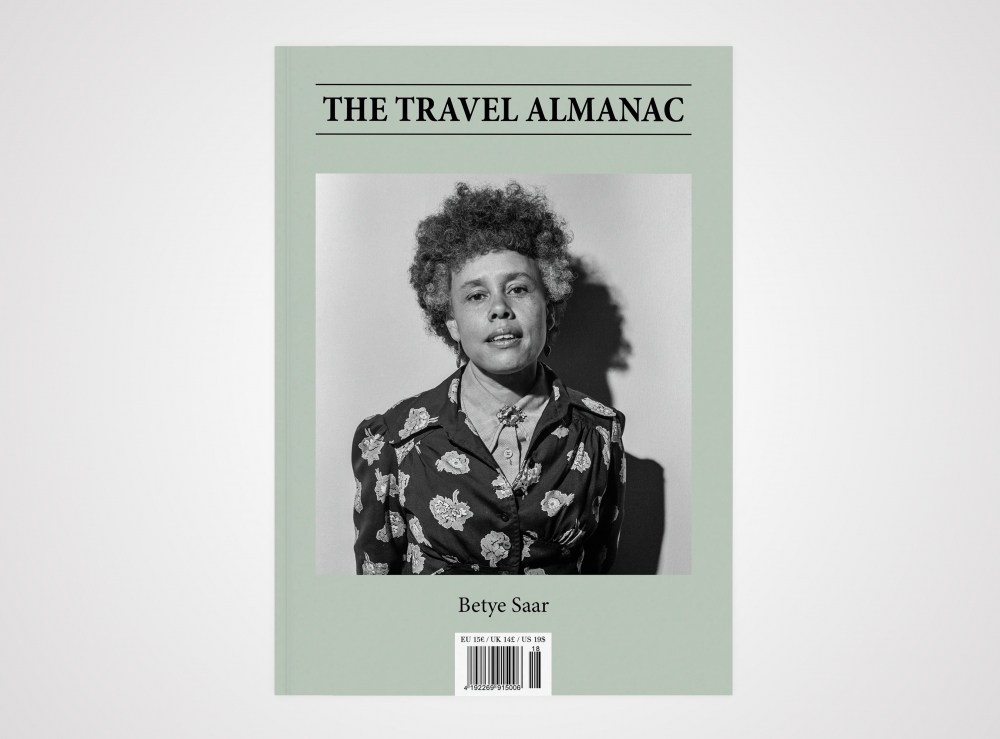 By Katrice Dustin for The Travel Almanac

Betye Saar’s 1972 work The Liberation of Aunt Jemima was once credited by activist Angela Davis with marking the beginning of the Black Women’s Movement. The piece—arguably Saar’s most widely known—depicts the mammy caricature of Aunt Jemima reimagined as a freedom fighter: a broom in one hand, a rifle in the other. Fast forward almost fifty years later to the second American Civil Rights Movement, and that same Jim Crow era symbol of systemic racism has finally been set free from the legacy of slavery, with Quaker agreeing in Spring 2020 to discontinue the infamous Aunt Jemima branding on their maple syrup bottles.

Born in Los Angeles during the Great Depression, the now 94 year old Saar would go on to become a prominent member of the Black Arts Movement and one of the first commercially successful Black female contemporary artists. Saar’s world, developed over the span of seven decades, is an exploration of memory, identity, mysticism and revolution, with nods to surrealism and folk art. She attributes childhood visits to Simon Rodia’s Watts Towers—the seventeen monolithic sculptures made of scraps of steel, tile and mortar in Southern LA—for forming her fascination with art and assemblage. Throughout her career, Saar’s travel notebooks have acted as loyal companions on voyages to Haiti, Egypt and China, amongst others, and con- tain a fusion of sketches, photographs, and watercolor paintings. These would go on to form a vast library of research for Saar’s future work, with some sketchbooks lying idle for as long as two decades before being transformed into an assemblage, collage sculpture, or installation.

Memory and nostalgia lay the groundwork for Betye’s creative process. Found objects and seemingly arbitrary scraps of paper are reanimated, a method which Betye likens to a shamanic practice. The debased and discarded are born again. Recollections of others become entangled with her own. Characters meant to represent the tyrannized and enslaved become modern day heroes. By breathing new life into the otherwise forgotten and taking little pieces of the places she has visited with her, Saar creates an amalgamation of visual stories traversing multiple realities—both mystical and political.

The following notes consist of gathered correspondences with Betye Saar conducted over the span of two months while she was in lockdown in Los Angeles. Saar gracefully granted us access to some of her personal collection of never before seen travel diaries, as well as rare archival images and documenta- tion. TTA wishes to sincerely thank Betye Saar and her family, as well as Roberts Projects LA for their graceful cooperation. Betye Saar will be the honorary recipient of the 2020 Wolfgang-Hahn-Prize, which represents an important recognition of her life’s work and impact on American contemporary art.