In her second exhibition at the gallery, Delphine Courtillot has created a series of paintings on paper that play with an iconography inspired by the popular codes of “mysterious” representation in cinema history wherein specific visual conventions suggest the inexplicable. In these paintings, Courtillot references both the Art Nouveau movement or Jugendstil, German for Youth Style, as well as early 20th century Amsterdam architectural heritage. Allusions are evident in Courtillot’s depiction of specific buildings including the Tuschinski movie palace, a landmark of the Amsterdam School (an architectural movement largely influenced by Expressionism that started in the Netherlands around 1910,) the Tiffany Lamp Studio, an inscrutable store possessing the allure of a turn-of-the-century bourgeois apartment stuffed with the celebrated lamps, as well as the famed Dijsselhof room in the Central Museum in The Hague (Dijsselhof, a Dutchdesigner very close to the Arts & Crafts movement, utilized traditional woodcarving and batik techniques to constitute an almost medieval décor,ultimately creating an enchanted dream world within the literal space of a living room.) 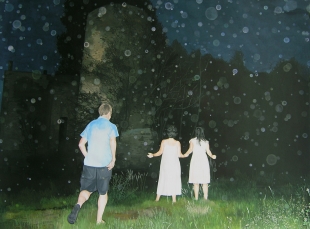