Loft is site-specific installation by San Francisco based artist Barry McGee. McGee takes over the project space, transforming the room’s physical relationship with the visitor into an interactive viewing. A distinctive cluster of McGee’s various paintings, works on paper and urban objects can be accessed by ascending through the floor of the utilitarian structure to the lofted space above.Working on the streets of San Francisco and signing his works with the tag, "Twist," Barry McGee is considered to be one of the leading artistic figures in California youth subculture. The artist draws his force and inspiration from the contrast and tension that exists between the city center and the suburbs, between the wealthy districts and the slums. His visual language is at the same time eclectic, ephemeral, radical and above all heavily influenced by the daily realities of the city. McGee’s complex installations convey a sense of vitality and chaos, juxtaposed with a precarious nature and sense of alienation. Large scale wall murals, clusters of small framed drawings and snapshots, various tools and other street detritus make their way into his installations in an almost symphonic fashion. Intricate paintings are executed then rolled over with latex paint, echoing the "buffs" that cover graffiti in urban areas. Clusters of glass bottles hang in a corner with painted portraits of characters of the night. 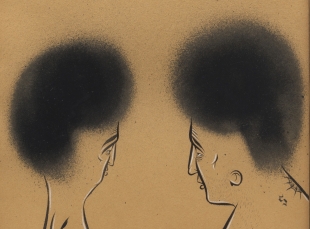