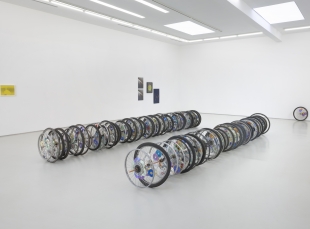 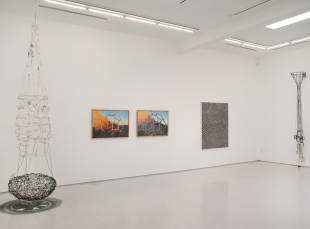 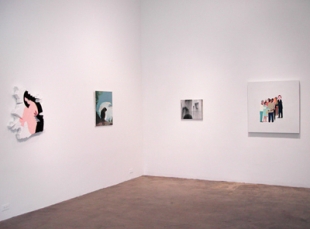 By Carolina A. Miranda

If you’d walked into Kori Newkirk’s sunny studio in downtown Los Angeles late last month, you would have found a wonderland of scavenged bits. Racks of cassette tapes. A tower of brightly colored pool floats. Several dozen bicycle wheels in various states of disassembly. Not to mention a mannequin head dipped in glitter, a pug doll with a jeweled collar and, pinned to one wall, a round of pita bread — evidence of the artist’s ongoing obsession with circles.

“If this were the East Coast, that thing would have sprouted all kinds of mold,” Newkirk said, chuckling. “But this is California. It just dried right out.”

Newkirk was in the midst of preparing for his first Los Angeles exhibition in five years — a one-man show that opened Saturday at Roberts & Tilton in Culver City, where he is showing a series of new sculptural works crafted from the explosion of bicycle wheels carpeting his studio floor. (He was circumspect on what exactly he was making with them: “I don’t like to give too much away before an opening,” he explained.)

View at latimes.com
Issue
Kori Newkirk: I always feel like I give too much away! Perhaps there is something about being born and raised analog that lies at the center of this. Why would I want to give it all away? January 2016

Known for his ever-evolving approach to painting, sculptural installation and photography, Bronx-born artist Kori Newkirk uninhibitedly explores cultural identity, black history and individual experience. His study of human landscapes and commerce has translated to a vast array of media—from artificial hair, pony beads and pomade to fiberglass and space-age materials. For his show opening at Los Angeles’ Roberts & Tilton Gallery, Newkirk turns his attention to the circle, examining its singular place in angular geometry, its human function as the wheel and the symbolic narratives that exist in both.

LACMA Associate Curator Christine Y. Kim first worked with Newkirk in 2001 in her former post at the Studio Museum in Harlem. The two discuss Newkirk’s evolving practice and his constant dedication to idea over form. 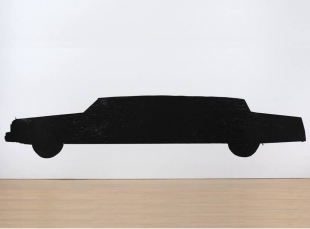 Los Angeles-based artist Kori Newkirk discusses his Modified Cadillac (Prototype #2) (1997), on view now in the exhibition Don’t Look Back: The 1990s at MOCA. Mining the symbolism of prototype and stereotype, the work-a silhouette of a late 1970s or early 1980s Cadillac made by applying hair pomade and black pigment directly to the gallery wall-engages with the formal properties of its materials, the politics of identity, and Newkirk’s own personal history.